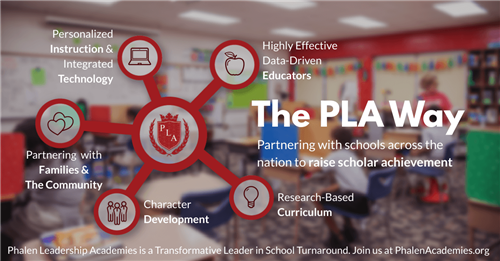 Phalen Leadership Academies (PLA) is an African American-led, fast-growing network of 22 district and charter schools serving over 10,000 scholars in Indiana, Texas, Ohio, and Michigan. They specialize in turnaround, particularly for schools that have large African American student bodies. Unlike many turnaround models that focus on strict discipline and stabilizing academic achievement in English and Math before introducing innovation, PLA’s approach is founded on cultural competence and love. Through their responsive methods, they have brought six schools from an ‘F’ rating to an ‘A’ while retaining on average 84% of the schools’ original staff and almost all the students and families. Earl Martin Phalen, PLA’s founder and CEO, asserts that the standard turnaround model “believes that the leadership is a failure, teachers are failures, parents are failures, and the children are failures.” In contrast PLA “is successful at turnaround because we execute best practices well and because we have such a deep love for and belief in our children.”

Many states and districts either use ‘turnaround’ and ‘innovation’ as synonyms or regard them as sequential stages in the redesign of a school--first you do turnaround and then you can layer in innovation. Earl Martin Phalen disagrees with both:

“Turnaround and innovation are inextricably linked because to take something that has been static and underperforming for, in many cases, decades, and completely transforming that culture-- the physical climate, the expectations, the excitement and energy--requires a mindset that has to embrace innovation. You have to look at everything that’s working well in schools around the country, take those pieces, stitch them together, and find a way to operationalize them. How we use technology, how we support teachers, how we make school a place of love and high energy--it’s about being open to what’s working in the world, building Professional Learning Communities, and then bringing this new learning design to our children in a way that is executed well and holds us accountable.” 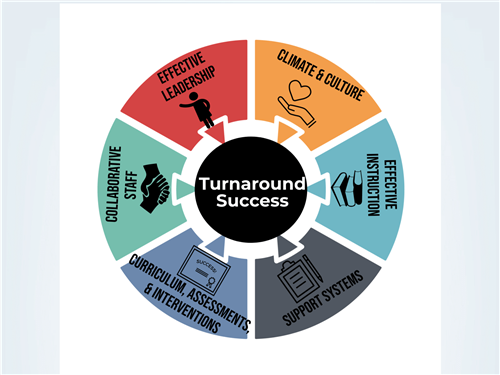 Transcend: Can you give an example?

EP: Jones-Clark Elementary School in Beaumont, Texas is an example of school where we shifted climate and culture in four short weeks, though that was preceded by six months of pre-work that set the school up for success.

Transcend: What happened in the six months prior to the turnaround?

EP: We always begin with a comprehensive educational analysis, and that’s what we did in Beaumont where Joe Siedlecki and his team at the Division of System Support and Innovation at the Texas Education Authority recommended us as a turnaround operator because of our prior successes with African American students.

EP: We usually do it between January and April. We want to understand what’s going well and what’s not going as well as it could. Our Academic Team leads with a multi-year deep data dive delving into historical achievement and growth data and paying particular attention to subgroup analysis. How are the different subgroup populations doing and how have they been doing?

We also administer a climate and culture survey sent by us, not the current principal, to all staff.

We run a parent survey.

We run separate focus groups with students, parents, school leadership--and, if it’s a charter school we’re turning around, with the board as well.

In our seven years of work, we’ve developed a rubric which our team uses to do classroom observations of every single classroom in the school. This rubric has a very clearly defined set of look-fors so we can calibrate cleanly and clearly. The look-fors include teacher/scholar support (which includes two-way respect), student engagement (which includes students visibly being invested in their work), and clarity of communication. This last one includes cultural responsiveness in engaging scholars’ interests and background. We look for collaboration and real world learning opportunities for scholars, as well as opportunities to extend and expand their vocabulary.

Transcend: What happens with all this data?

EP: We mash it together and then segment into what we think is great and what has room for improvement. And we take all this information to the school principal, and if applicable, to the charter board for feedback. We revise based on these stakeholder conversations, finalize it,  and move to the planning phase.

Transcend: Why not leadership? 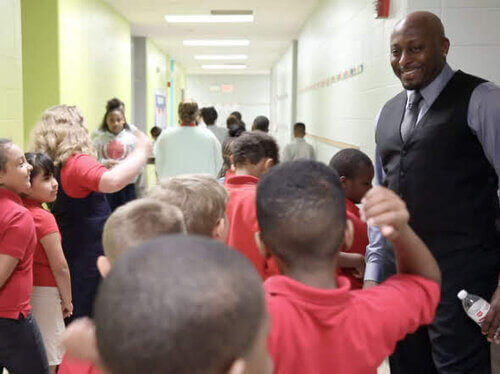 EP: We’ve learned how important leadership is in setting the climate and culture of a school. Now, we activate the leadership in the turnaround process. The next step after all this data gathering and analysis is to develop a 30-60-90 plan for relaunching in the fall. Where better to explore how committed the leader of the school is? We explicitly tell them up front, “Let’s work together on the plan. We’re going to explore your capacity together through this.”

Transcend: So you’re almost turning this into a real-world project where you’re assessing the leader’s capacity to lead the school...

EP: Exactly. Our look-fors for the leader in this 30-60-90 day plan development process are:

From collaborating together, we get our strongest data on how effective this leader can and will be.

Transcend: Can we clarify--does the leader understand that the plan-building is a formative assessment?

EP: Yes, we’re transparent about that. We don’t believe in creating anxiety--that goes against the climate and culture we’re trying to create. For example, teachers know by May whether they’re going to be renewed. The leader knows that this plan is part of their renewal process.

Transcend: What happened in Beaumont?

EP: In Beaumont, sadly, we agreed that it wasn’t a good fit. By June we had a sit-down conversation with the principal--and by the way, the principal also has the right to say ‘no’ to our analysis and plan. We agreed this was not a good fit.

We then found a new leader who not only had the beauty and kindness of the previous principal but also was driven by an urgency that had been missing. This new leader has been able to  ignite a special energy that has enabled Jones-Clark to turn its climate and culture around in less than four weeks.

Transcend: We want to hear more about that, but first, did you keep the teachers you expected to?

EP: We retained 71% of the existing staff, and the remainder chose to transfer to other schools or retire.

Transcend: What did the PLA team and the new leader do to transform climate and culture in four weeks?

EP: The most important step was identifying exceptional leadership. Then we took four concrete actions to support that leadership and bolster her leadership team. 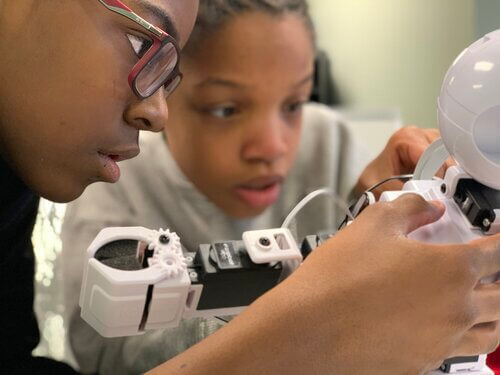 EP: We focused on staff. We supported staff in understanding the PLA model, in growing relationships with parents, in assessment and using data. But, first and foremost, we paid attention to staff morale and culture. Beaumont had increased salaries by a mere $300/year. We used 1882 funding to create a fairer compensation structure (roughly an increase of anywhere from $2,500 to $3,500 in annual compensation), and then a few weeks later the district found the funds to do the same. We created a culture of respect and joy. Staff participated in team-building experiences like escape rooms and dinners where spouses and significant others were invited. We really listened to teacher voice.

Transcend: Tell us more about your staffing structure.

EP: We think of that as one of our core innovations that reinvent the current school model.

We don’t staff a school at 100%. We build our model for what we call ‘regrettable loss’--folks who get other offers and people who come to our PLA training and don’t like it. Given that inevitable fact of district or CMO life, we staff at 110% and use that metric as our 100% internally. So when one of our schools says they’re staffed at 92%, what we mean by that is that it’s staffed at 92% of what another school would consider 110%.

Transcend: Who are the extra 10% and what do they do?

EP: We have six teacher interns who are certified and licensed. They start out as interventionists but they know they will get a classroom at some point in the year (we also have full-time intervention teachers). This lets our instructional model have more capacity at Tier 2 and Tier 3 instruction. We don’t use subs in our model; interventionists manage classrooms if someone is sick. This helps create consistency for schools because everyone knows the behavior management system, the curriculum, and our expectations.

EP: Actually, it costs about the same as the old model. It simply plans in advance for all the things we know will happen, so we don’t move from crisis to crisis if a teacher departs, but rather use staffing as a way to create stability from the get-go.

EP: 48% of our staff are Black and 11% Latino/a. We partner with Historically Black Colleges and Universities (HBCUs). We develop leaders and teachers of color. I don’t believe you need to be black to teach black children: you need to be culturally competent and love our children. But it is important for black and brown children to have more role models in their lives, and teachers and school leaders are anchor role models.

How we do culture and climate is also very important. We’re explicitly not a no excuses militaristic model. We’re trying to build leaders for the future, and with leaders you tell them to say go left and they’ll say why. We want those whys--we don’t want to stifle them.

Transcend: Where do parents and families fit into this?

EP: Parents are such critical partners in this journey. In the same way that we want our scholars to use their voices, we want parents to be a voice--so we build relationships with them. We explicitly train staff on how to make the first call home. Parents can come observe anytime (there’s a process for it--you sign up and 24 hours later you come). And we also have a formal process to collect parent guidance--surveys. We think of families as partners in their scholars’ journeys with us. We send home academics, behavior, and effort reports--so every two weeks you’re getting a progress report for your child.

A lot of schools disrespect parents--we have to turn that model on its head and hold the parents in the highest regard. We have to be parent advocates--they come to us to tell us that I’m losing my house with this COVID crisis, I can’t pay my utilities. And we problem-solve with them. Our stance is, “What can we do to help you strengthen your position?” Because that position is the context for our scholars.