INDIANAPOLIS, Ind. - A program designed to introduce students to the fields of science, technology, engineering and math is expanding at an Indianapolis elementary school.

The STEMNASIUM LEADERSHIP Academy at the Phalen Leadership Academy, a public charter school, currently has 20 elementary school students enrolled in the program. Next fall, all 400 of the school's students will take the class as part of the curriculum. 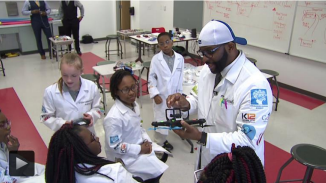 "The ultimate goal is to have students that are power users and will solve problems in their local and global community," STEMNASIUM Founder Tariq Alnasir, or Coach T, said. "STEM is a language and early exposure increases your chances of being successfully fluent at that language when you start early.” Coach T, a former military intelligence specialist, has made it his mission to introduce children living in low-income communities to careers they might have not though of otherwise.

"At STEMNASIUM we are helping students very early, as early as 3, to establish an identity in STEM and put them on a life trajectory that helps them see themselves in that particular field of study," Coach T said.

One of those students Coach T is molding to pursue a career in a STEM field Phoenix Gray. “Coach T has taught me that we can be anything we want to be," Gray, a STEM Ambassador at the Phalen Leadership Academy, said. "And especially because I’m a girl and I want to be an engineer and I think that’s actually exciting."

Statistically, Gray is fighting an uphill battle. Right now, only about one in every 10 STEM professionals is a minority woman. Gray said she plans to defy the odds and study architectural engineering at the Rose-Hulman Institute of Technology.

"My brother who’s three said he wanted to be a doctor when he grows up. So I want to build him a hospital," Gray said.

The STEMNASIUM curriculum will also be offered to the Phalen Leadership Academies and other elementary schools around the state, bringing the total number of students who will take the class next year to more than 1,000.

Click here, or on the image above, to watch the video.