After years of dreaming, a group of educators has a plan to address education inequity on the Far Eastside.

When I first met a group of educators turning around a Far Eastside elementary school several years ago, they talked often about the heartbreak of watching students leave their strong school and not having a good junior high option in the area.

In the years that followed, as the group brought huge improvements to IPS 99, then IPS 88, and then to IPS 93, they kept talking about the problem. For all that had been done to improve life for the students in their elementary schools under a teacher-driven program called Project Restore, they feared what was happening when those students headed off to troubled John Marshall or another struggling middle school. 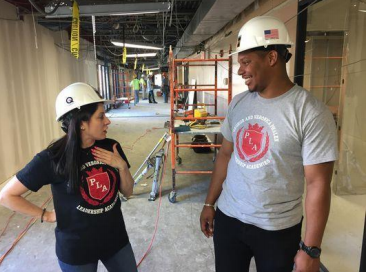 “It’s kept us awake for years,” Nicole Fama, principal of IPS 93, told me this week. “Middle school is when you lose kids. That’s when they decide what path they are going to follow. And we’ve felt like we were just pushing them out of our schools without a good place to go.”

But Fama wasn’t bemoaning the problem. Instead, she was happily walking me through a construction site that will soon be the first middle school run by her and others on the Project Restore team. After years of worrying about students leaving their elementary schools, they are bringing to the far eastside a new charter middle school that will serve as an extension of a program that has proven to work time and again.

“You look at it and you almost can’t believe it’s happening,” Fama said as we toured the future Phalen Leadership Academy middle school in construction helmets. “I’m still in a bit of shock. But you know, we have great kids and great families, and they deserve this. I can’t predict everything that will happen in this building, but I know that we will not fail them.”

I’ve written about Project Restore many times over the years. It started eight years ago when IPS teachers Tammy Laughner and Dan Kriech, fed up with the system and too much academic failure and behavioral problems, forced through a turn-around at School 99 on East 30th Street. Along with Fama and administrator Gwen Hardiman, they focused on discipline, family engagement, energy in the classrooms, increased academic challenges, and instilling in students a belief that they could succeed.

They placed high expectations on the students and the staff and used testing in the smartest way I’ve ever seen. The goal of tests they created was simply to help teachers in real time address academic problems and gaps — before students fell behind. And if you visit their school on test day, you’ll see something amazing: Excited students eager to help their classes outscore those next door.

The F-rated school saw its scores skyrocket, along with the learning environment. It soon was awarded an A state rating. The second turnaround at School 88 brought similar results. And a third, at School 93, saw the school move from an F to an A in just two years. School 93, by the way, is part of a groundbreaking partnership between the district, the Restore team and Earl Phalen, an inspiring charters schools operator whose great work can  found throughout the city.

Phalen’s group recently purchased a sprawling former charter school building near 42nd and Mitthoeffer. Half of the building, which will open to 7th - and 8th-graders in July, is now undergoing a massive renovation. Fama and her leadership team at School 93 also will run this school.

Challenges abound for a group that will now be in charge of two schools. Fama and others are working from scratch to get the word out about a new middle school option and, unlike the 93 partnership with the district, this school will be an independent charter. (After many negotiations, the district and Phalen unfortunately failed to work out a deal for his organization to take over John Marshall.) Fama said the sometimes-bitter politics of education will not be a problem, even though this school will compete with IPS for students and staff. As it has always been, she said the goal will be to keep problematic issues, from neighborhood problems to policy debates, outside of the building so that teachers can teach and students can learn.

As we talked, I mentioned the fact that we were walking through a former charter school that had performed so poorly it was forced to close. It’s a reminder than big dreams aren’t always enough. “That’s important for us to remember,” Fama said. “Someone else came in here with similar intentions and they didn’t make it. But I just keep telling people that they used to say we’d never have an A school on the eastside, and we proved that wrong.”

She continued to talk, as we walked through a dusty gym that will soon receive a new floor and scoreboard.

“Sometimes you have to have faith in your teachers and your families and students and say this is not about just trying to make it work,” she said.

“This is about doing everything you can to make sure it does work.”

Time and again, Earl Phalen and the Project Restore team have overcome big odds. In doing so, they have given a generation of students a better chance of achieving their potential. This next challenge might be the biggest of all. But I sure wouldn’t bet against them.

Thank you for reading. Please for me at Twitter.com/matthewltully.

More information about Phalen Leadership Academies is available at http://www.phalenacademies.org/.