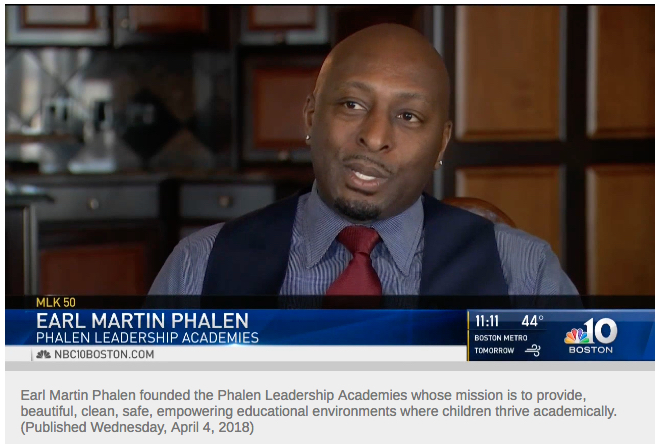 Earl was the Phalen's eighth child and his mother Veronica was inspired to adopt him after reading a
sobering article in the newspaper.

"There was an article on the front page of the Boston Globe that said 70 percent of Black Boys in
Massachusetts Foster care system would end up in prison by the time they were 21," Phalen said. "So
my mom said if I can't be a freedom rider, we are going to adopt a black boy and give him a loving
home.”

Earl was a black child growing up in a large, loving white family, however he recalls how his first
exposure to racism during a third-grade dodgeball game changed his life.

“We won and were teasing a little and then this boy said 'at least I am not an n-word.' I just kind of
froze," Phalen recalls.

"I felt hurt. I felt embarrassed. I said to myself maybe if I become a politician maybe if I become a mayor
of a city I can use that to make sure no one else feels the way I’m feeling in this moment.”
Earl Martin Phalen founded the Phalen Leadership Academies whose mission is to provide, beautiful,
clean, safe, empowering educational environments where children thrive academically.

His political aspirations led him to Yale and Harvard Law School, but after organizing a mentoring and
tutoring project with children in Roxbury, Phalen realized his true calling was education, not politics.

“We found that most of the kids were working at a third-grade level and they were middle schoolers,"
Phalen said.

Phalen created Building Educated Leaders for Life [BELL] in 1992. It started with just 20 Boston Public
School children and now serves nearly 20,000 students throughout the country, including Detroit, New
York, and Baltimore. The after-school and summer enrichment program has a track record of improving
reading, writing, and math skills.

After 17 years, Phalen left BELL to lead his newest passion, Phalen Leadership Academies. The mission is
to provide, beautiful, clean, safe, empowering educational environments where children thrive
academically. The children refer to themselves as scholars rather than students.
Phalen considers how his life is aligned with Dr. Martin Luther King Jr.'s legacy.

“The goal is social change. There are 100 ways to get there," Phalen said. "I’m trying to use one way
which is let’s give our children the type of schools they deserve. Give them the type of future they
deserve."

There are twenty Phalen Leadership Academies around the country and the schools are named after
Earl's parents, George and Veronica Phalen. It's a tribute to the loving couple from Norwood who
changed the world for a young boy, a boy who grew into a world-changing man.